Ok, that title is a little misleading, but the plant is not what was advertised!

I had an experience recently that I thought would be perfect to share on the blog (and most likely in a future podcast as well). I have a plant in my front yard that I thought was citronella. It smells like citronella and I was told when I moved in it was planned there to help deal with the mosquito problem in the yard. It was in need of a pruning so I decided to make some citronella oil from the clippings. My intention was to try and make my own citronella candles, or tiki torch oil to be used outside the house since we still have a mosquito problem.

My first try ended badly, as it turns out my stove top was a little too hot and I ended up burning the clippings!

I had much more so I went for another try. Here is where I am going to add in the lesson. Now how could I get a lower temperature when I burned the clippings with my stove on the lowest setting? Well when water boils, it stays at its boiling temperature (it does this when it freezes as well). So as long as I have water boiling it can’t get hotter than 212 degrees F or 100 degrees C. I made a contraption that involved a big pot with water, a glass bowl and a pie tin so I could have the oil heated by the water and not the stove.

The oil I was using can reach a much higher temperature, so the water boiling under it will help keep that temperature at or below 100 C. This totally worked!

See? That looks much better!

While I had my contraption set up and my oil brewing I looked up the plant online. To my horror I discovered that this specific plant is NOT where citronella oil comes from!

Oil, but not citronella oil!

This plant is sold as “mosquito plant” and looks like this:

When you look it up the name is Pelargonium citrosum, Citrosa Geranium, or Citronella Plant, and as I eluded to in the title, this plant is a lie! This plant is not where citronella oil comes from and in fact has been shown to not have much of an effect on mosquitoes (they were seen resting on it in the study).
Pelargonium is the genus of this plant, and from there we can begin to explore what other species are in the same genus. Since this plant can’t be used for its intended purposed (it won’t repel mosquitoes) its time to figure out what it is and how it CAN be used.
From Wikipedia:
“Other than being grown for their beauty, species such as P. graveolens are important in the perfume industry and are cultivated and distilled for their scents. Although scented pelargoniums exist which have smells of citrus, mint, pine, spices or various fruits, the varieties with rose scents are most commercially important. […] The edible leaves and flowers are also used as a flavouring in desserts, cakes, jellies and teas. Scented-leafed pelargoniums can be used to flavor jellies, cakes, butters, ice cream, iced tea and other dishes, The rose-, lemon- and peppermint-scents are most commonly used.”
So for a decorative plant, for scents, and as edible flowers. I also found a fact sheet for the genus from The Herb Society of America (here) that detailed some folk uses for these plants.
Although pelargoniums aren’t as rich in folklore as some other herbs, they are associated with a few
legends, superstitions and at least one hoax. In Poland, pelargoniums have special significance and are considered a “symbol of hope” and “protector of the home”. The ability of a Pelargonium plant to add fragrance to a room is especially valued in Poland’s industrial areas marred by air pollution.
These are associations for other species in the genus but interesting.
At least one Pelargonium species has a somewhat magical reputation. During the wars of 1850-1853, the roots of P. pulverulentum were believed by Xhosa warriors to “ward off the bullets” of their enemies and/or dampen gunpowder.
And I love finding tid-bits like that!
Some relatively recent Pelargonium folklore involves the notorious “citrosa mosquito-fighter,” Pelargonium ‘Citrosa.’ In the 1990s, the plant (which was also marketed as Pelargonium citrosum ‘Van Leenni’) sold for $7.99-$18.95 in Ontario, and was alleged to be a genetically engineered cross of a Pelargonium and Cymbopogon nardus, a Chinese grass containing citronella oil, but analysis of the plant and field trials proved it to be a hoax. The plant’s oil composition was very similar to rose geranium, including only .09% citronellal (one of the active components in citronella oil). The citrosa plant did not protect human subjects from mosquito bites more than controls, and in one field trial mosquitoes actually landed on the plant. Interestingly, there are pelargoniums with documented insect-repellent activity.
And here is my plant. What a bummer. So I decided to ask, what can I do with oil from a plant that is a hoax, and here are the responses I got!
Jen (@rueandhyssop):  lemon-scents are often used to draw things to you or open roads. But this is false citronella? What about a keep-away or distract the law oil. Or@a Stop Gossip/Shut-Your-Mouth oil.
SilverShadow(@CriticalFault) road closing oil perhaps as its specifically a false plant…otherwise if it has the lemonesque qualities… then perhaps use it as such still. Most  old Rootworkers didnt know the latin names nor were biologists 😉
Joseph (@JosephMagnuson): Lemon also is often used to sour or repel. Citrus is/can be used differently than lemon.
In case you were wondering what plant I would need to make my citronella oil, the plants that this oils is made from are types of lemongrass and their genus is Cymbopogon . Cymbopogon nardus is used for making oils and looks like this: 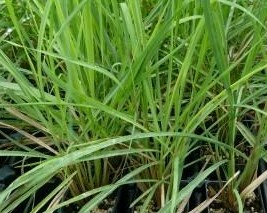 Its a grass. Totally different from what I have in my yard.
The moral of the story is, in this case I used a little physics and a pinch of biology to make an oil and understand the plant it came from. Critical thinking is very important in a magical life. Don’t just take things at face value, ask questions and think creatively! Also I need to find some real citronella for the front yard!
Peace, Love and Rocks!
~ Kathleen