Curiosity notes and information, because… MARS

August 8, 2012 / katborealis / 1 Comment
Here is an illustrated guide to the information I presented in the last mini-episode. Because sometimes pictures help! I am overflowing with joy about this mission! In fact any mission to expand our understating of the universe fills me with pride for our species and joy!
The Mars Science Laboratory (the mission name) carrying the rover Curiosity has landed on Mars! But lets back up. The Mars Science Laboratory was launched from Cape Canaveral Air Force Station aboard an Atlas V rocket around 10:02 EST on November 26th, 2011. 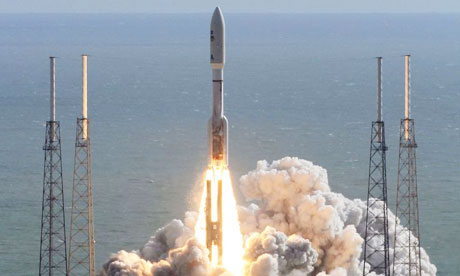 The end to the transit came with the successful  landing of the rover Curiosity in Gale Crater. The official landing time is 05:14:39 UTC on August 6. However, it takes 14 minutes for a message from Mars to reach earth so it was more like 05:30 when landing was confirmed. A orbiting satellite named Mars Reconnaissance Orbiter took a photo of Curiosity descending by parachute. And Odyssey another satellite acted as a go between redirecting communications back to earth since the landing site was beyond the horizon. The Curiosity Rover is 5 times as massive as Spirit and Opportunity two rovers currently on Mars.
And has over 10 times the mass of scientific instruments
It landed in the Aeolis Palus region of Gale Crater near the mountina Aeolis Mons a.k.a. Mount Sharp
Looks like everything survived the landing and the estimated life is “4 years or until the parts die”
MSL is part of a longer term NASA Mars Exploration Program
Curiosity was named in an essay contest won by 6th grader Clara Ma from Kansas
Objectives: from the source! (This was take from the NASA mission website)

To contribute to the four science goals and meet its specific goal of determining Mars’ habitability, Mars Science Laboratory has the following science objectives.

Geological and geochemical objectives:
4. Investigate the chemical, isotopic, and mineralogical composition of the martian surface and near-surface geological materials
5. Interpret the processes that have formed and modified rocks and soils This is a topographic map of Gale Crater. The circle is the landing site.

Why is Mt Sharp officially known as Aeolis Mons so interesting?

It appears to be composed of a layered material that may have been deposited over 2 bilion years Origin is not certain but the current hypothesis is that it is an erosional feature and is the remnants of sedimentary layers that once filled the crater completely and maybe just maybe were originally deposited in a lakebed like environment. Oh course this idea is debated as there is possible evidence of cross bedding in the upper strata which suggests an Aeolian or wind driven deposition process.

The toys… I mean scientific instrumentation on Curiosity Where all of these instruments are located on the rover

Mast Camera (Mast Cam) – this is the large camera that will soon be sending us awesome high res photos of mars! There are two cameras and can take multispectral and true color images

First MAHLI image
Mars Descent Imager (MARDI) took photos during the descent with a 1.3 milli-sec exposure time
[youtube http://www.youtube.com/watch?v=UcGMDXy-Y1I]
This is that video taken by MARDI
Hazards Avoidance Cameras (HazCams) two pairs of black and white navigation cameras on the four corners of the rover. They are for autonomously avoiding hazards and for safe position of the arm on rocks and soils. This is what sent the first images back. First image sent back by Curiosity via Odyssey (remember that other satellite???)

First NavCam image! Look its Mt Sharp!
Chemistry and Camera Complex (ChemCam) a suite of remote sensing instruments including the first laser induced breakdown spectroscope system to be used for planetary science and a remote micro image. It can target a rock or soil sample from up to 7m away, vaporize it with a laser and collect a spectrum of light emitted by the vaporized rock. This will be used to do chemical analysis.
Rover Environmental monitory station (REMS) measured the environment so humidity pressure temperature  wind speed and ultra violet radiation
Alpha particle x-ray spectrometer (APXS) irradiates a sample with alpha particles and maps the spectra of xrays that are re-emitted to determine the elemental composition of the samples.
Chemistry and Mineralology (CheMin) x-ray diffraction and x-ray fluorescence instruments. These can ID and quantify the abundance of the different minerals that they find on Mars. It has a drill and will drill samples into the rocks and the resulting fine powder will be sampled. The xrays are diffracted back by the crystal structure and these characteristic patterns allow for ID of the minerals!
Radiation Assessment Detector (RAD) this was the first of ten MSL instruments to be turn on and characterizes a broad range spectrum of radiation in the environment within the spacecraft the goal is to research the shielding needed for human explorers
Dynamic Albedo of Neutrons (DAN) a pulsed neutron source and detector for measuring hydrogen or ice and water at or near the surface
Sample Analysis at Mars (SAM) analyses organics and gasses from atmosphere and soils.
Entry, Descent and Landing: EDL As you can see the landing of Curiosity was a highly choreographer dance.
First Curiosity had to say goodbye to the cruise stage that got it all the way to Mars.
Second it hit the upper atmosphere heating up on entry. However there isn’t enough of atmosphere to slow it down enough
So… Third the parachute was deployed to slow it down
Fourth the heat shield separates falling away allowing the instrument to get a radar lock on the ground
Fifth the back shell with the parachute separates because that didn’t slow it down enough
Sixth the SkyCane stage fires jets to slow itself further and lower itself into position
Seventh the rover is lowered on cables by the sky cane,
That done… the sky cane flies away to crash away from the science targets.
Curiosity is now safely on the Martian surface and can wake up, check her surroundings and start getting ready for some science!

Here are the locations of the various parts.

Again if you have any further questions feel free to ask! Or keeping reading and exploring!